The inaugural Hampton Downs 101 race weekend was an absolute success for the GT series, for Hampton Downs and Tony Quinn, who happens to own both.

On behalf of Cumulo9, thank you to those of you who attended. We hope you managed to get some insight into the preparation and management of a professional Ferrari racing team.

The weekend was a mixture of ups and down for Ferrari with the Cumulo9 sponsored Trass Family Motorsport 458GT3 suffering a left rear suspension failure on Saturday in Q1. The team reluctantly withdrew the car from the race. 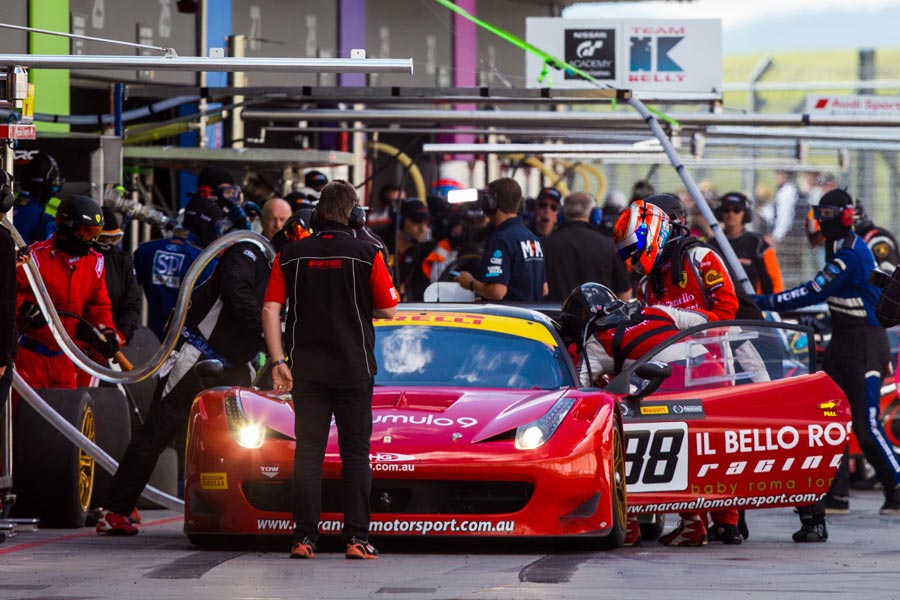 The Maranello Motorsport Ferrari 458GT3s (car numbers 8 and 88) did not qualify well, but the Compulsory Pit Stop (CPS) rules and the fickle nature of a three-hour race gave us hope that a result was possible.

The race itself was a stunning spectacle from start to finish. Following a grid walk that saw thousands of people invade the track, Temuera Morrison gave a stirring rendition of the National Anthem followed by a haka.

The race started on time with no major incidents. The 8 and 88 Ferraris maintained their starting positions and both came in for the first CPS around lap 20. The number 8 car with Adrian Dietz at the wheel was shunted out of the pit exit by an over exuberant Audi and ended up in the gravel trap. After waiting for the tow truck to haul them out they were 2 laps down and absolutely gutted as they were on track to maintain somewhere between 8th and 12th until the second CPS which would have seen them in with a real top ten chance with Cam McConville back behind the wheel.

The number 88 car had a great first stop and Peter Edwards threaded the Ferrari back out into 10th place. There were a couple of incidents in this second stint that brought out safety cars, and luckily, there was one shortly before our second CPS. That went smoothly and Graeme Smythe managed to merge onto the track in 2nd place. The leader then pitted and we were running 1st. All eyes were glued to the pit monitors and at 20 laps to go we were still in 1st with a 20 second lead over the pole setting Lamborghini.

With six laps to go an incident required the safety car and our lead evaporated to a few seconds. Graeme fended off the Lamborghini until the 2nd to last lap. Now running second the Denyer/Morcome McLaren tried a ridiculous pass on the 2nd to last corner of the final lap. They took Graeme out and left him stranded. The resulting significant damage to the McLaren meant it was passed by the Martin/Padayachee Walkinshaw Porsche.

So hero to zero in the blink of an eye, but what an exciting race. Check out the highlights from Sunday’s racing here.

The Maranello Team were rightfully gutted, but that is racing and both the Trass and Maranello teams are now refreshing their 458GT3s in preparation for the Highlands Park 101 on November 13th.

It was great to have the chance to host a few of you at the Pits over the weekend. Now we move onto Cromwell for the final race. Chris is heading down for this race also and would like to extend the offer of a pit tour again if anyone is attending the race down there. Please drop us a line here and he will meet you and arrange a pit tour.

The Cumulo9 Product Suite Explained – in a new video...

Finding one company to handle your digital communications is not an easy task and dealing with multiple suppliers can waste both money and time. To help explain what our core products deliver, how they can benefit and add value to your business we have developed a short video that explains each product for you.
Find out more

It’s not too late to get your Christmas Communications Sorted

What is your organisation doing to mark the holiday season? Christmas is just over a week away, but don’t panic we can help make your (last minute) Christmas to-do list a bit shorter with our Christmas communication templates in C9 campaign
Find out more

Data Management software provider Syncsort has recently closed the deal to acquire Global Technology company Pitney Bowes software and data business. Everything has been agreed and the deal is now done as of 2 December 2019.
Find out more

Hybrid Is The New Paradigm For Customer Experience

The Quadient commissioned study of 180 senior customer experience (CX) leaders in Australia, Malaysia, New Zealand, and Singapore identifies some of their challenges in delivering hybrid CX.
Find out more

In the past decade, there has been considerable activity around e-invoicing, primarily driven by companies and Governments implementing end-to-end procurement solutions. Cumulo9 is ideally positioned to understand all of the “bleeding edge” solutions that are in the market, and we’ve been able to identify and partner with what we consider to be the “best” solution currently on offer.
Find out more